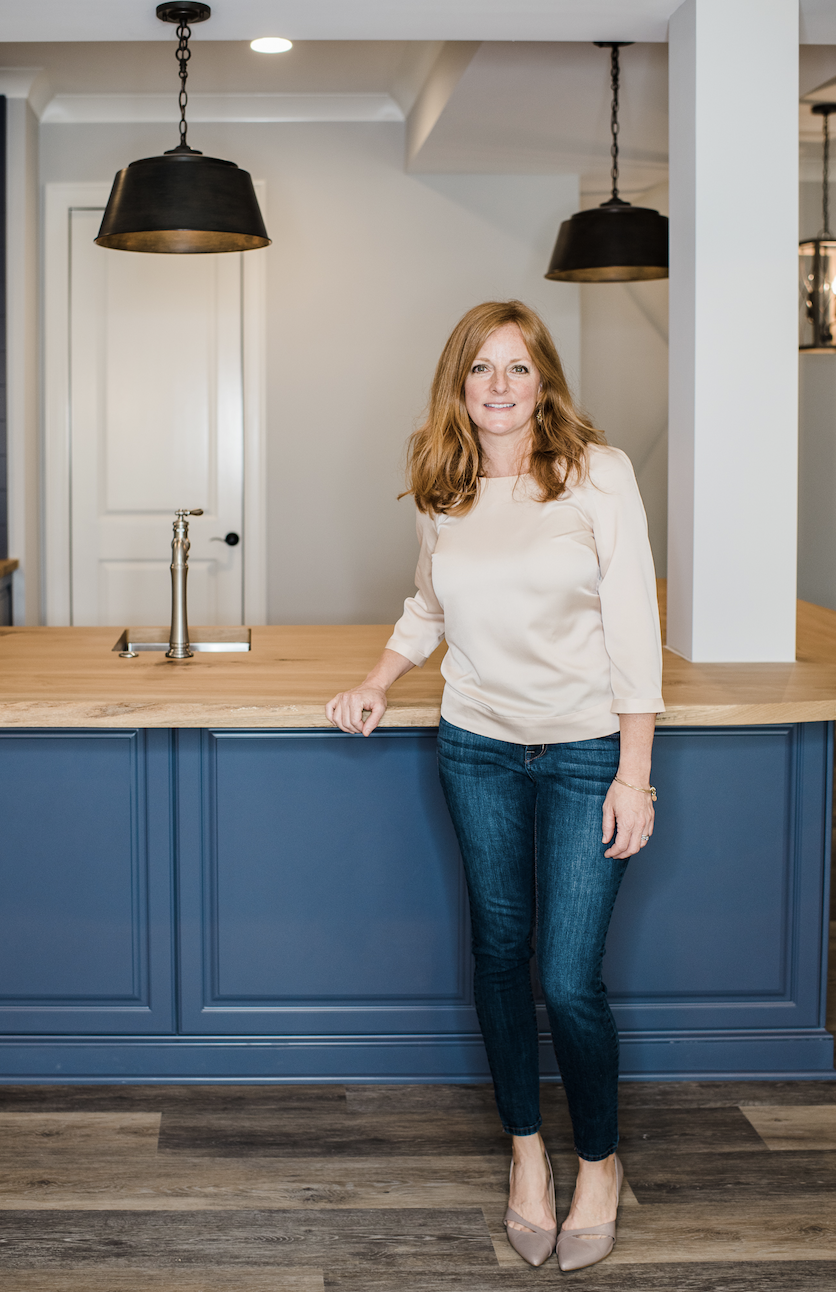 Celebrating teamwork and friendship in the design industry

In all industries, including interior design, the lure of success can lead to tension among industry professionals. DSA has always believed in collaboration and kindness over competitiveness. That’s why we’re honoring Angela Knight for supporting the success of others by graciously promoting a fellow designer.
When our 360° Design Award Winner, Natalie Papier, was moving to Charlotte, Angela was part of the team that helped renovate her home, including the kitchen featured. (below) This kitchen is what won over the DSA members judging the contest and was actually found on Angela’s portfolio when it was submitted into the contest. When DSA reached out about it, Angela didn’t hesitate to explain that the design had been the vision of Natalie and insisted that she got the credit for it and the award. WOW – how noble!
DSA was so impressed with Angela’s willingness to support a new designer moving to her area that we decided to honor her with her own award: the Altruism Award.
photographer/ Megan Easterday

The benefits of teamwork — “My role was to… make sure we made everything happen.”

When a builder Angela works for, Howie Webb with Ashland Custom Homes in Charlotte, was hired by Natalie to renovate several rooms in her new Charlotte home, Angela was called in to meet the family. “That was my initial meeting with Natalie. She had some great ideas for the space, and my role was to draw it all up on the computer, work with the local cabinet company to create the look she wanted, and collaborate together on what would work, what wouldn't work, and how we could achieve that look.”
Angela worked with Natalie on sourcing materials, finding countertops, and gathering pricing information. She also completed all of the CAD drawings.
Remembering how impressed she was with Natalie’s vision, Angela says, “She knew what she wanted, and that was awesome. My role was to make sure the details were taken care of and to make sure we made everything happen between the builder, her, and myself.”
Angela explained, “I was suggesting things, the builder was suggesting things, and we finally agreed upon what would work with the application that we wanted. It was a group effort.”
Angela has fun with collaborations in general and recalls one of her favorite ones — a house on Lake Norman with a “really fun client.” Angela says, “She was very funky and her house was very colorful. We did green cabinets, and I just thought back then that was so bizarre. And then we did a butcher block island. And it was just really cool.”

Sharing success — “There is enough work to go around.”

Even though Angela contributed CAD drawings, shared vendor connections, and was instrumental in the whole process of Natalie’s kitchen renovation, she didn’t want Natalie to miss out on any credit. She says, “Because I knew Natalie had been working so hard on publicizing her work, I didn't want to act like that was just my work.”
Especially since Angela said she and Natalie are different types of designers. “She does more of the sofas, the art, and stuff like that. And I do more of the tile, the cabinets, and all that stuff.”
With such a vast range of specialties and styles, it makes sense for designers to connect and be open to collaborating. Designers often encounter clients looking for styles or skills they don’t specialize in, and you never know when a friendly reference can come in handy.
Even if she had shared a specialty or style with Natalie, Angela says she still would have been excited to work with her and welcome her to Charlotte. “I mean Charlotte's enormous. And we have so many designers and honestly, I mean there's never a fight for work or anything. There's just so many projects that that doesn't even come into play.”

A philosophy based on kindness and connection – “Making sure everyone feels like they’re my favorite client.”

Angela is devoted to a positive and personalized experience for each and every one of her clients. She says, “My goal is to make sure every client feels like they're getting top-notch service. I don't want anyone to feel like they're getting less of a service than someone else that I serve. I'm always conscious of that, making sure that everyone feels like they're my favorite client. I mean, I love them all. So that's something I try to strive for.”
While her design style leans toward clean and transitional with a touch of “classy French,” one thing she is conscious of is giving each house she designs its own unique flair. This is because sometimes she designs houses close to one another and wants each resident to feel special.
She doesn’t want neighbors coming over for a dinner party thinking, “Hey, wait a minute… that’s my chandelier.” Right now, she says, “I have three houses in a row, like literally right next door to each other. And then the fourth house is a house I did a couple of years ago. So I have tried to change them up. You just have to kind of get creative…but not go too crazy.”

Angela’s path to design — “I know nothing about kitchens. What are you talking about?”

Before finding her passion for design, Angela majored in communications and planned to build a career designing magazine advertisements. After graduation, a friend in the building industry told her about a position as an assistant for a kitchen designer. Angela laughed at the memory, “I remember telling her, ‘I know nothing about kitchens. What are you talking about?’” But she decided to try it out and ended up loving it!
It was Angela’s first encounter with sketches, floorplans, and design software. She remembers reading a book about how to build windows and walls on a kitchen and bath software program and how foreign it felt at first. Soon after, she moved to Charlotte and began working as a designer at a kitchen remodeling company where she stayed for six and a half years.
After having children, Angela’s husband encouraged her to start her own business. She was nervous at first but one day decided, “Okay, I'm going to buy a computer, I'm going to buy the drawing program and see what happens.” She continues, “And that was 2013, and I'm busier this year than I've ever been, so it's good!”
Angela works primarily with builders and handles cabinets, counters, moldings, lighting, and other surface details. She earned her interior design certificate from UNC Charlotte and is both RIDE certified and certified through the National Association of the Remodeling Industry (NARI) as a Certified Kitchen and Bath Remodeler (CKBR). She is also a DSA member and a member of the NKBA, National Kitchen and Bath Association.
Although Angela wasn’t sure where her job as an assistant to a kitchen designer would lead her, she remembers a high school teacher coming to that first showroom and saying, “Angie, you know, you could really make a living out of this. You would be really good at this.”
And now she is not only thriving in her own business but doing her part to help others thrive as well. We are glad to have people like Angela in our industry and to honor her with our Altruism award.

Photographer Megan Easterday
As many of you know, DSA began as a unique design organization focused on inclusivity and a mission to encourage designers from all walks of life to find success. We should not be threatened by one another but encourage each other in the spirit of creating as many beautiful homes in the world as we can for people to live out their best lives and most precious moments. That is just what Angela did, and now her kindness has benefited both her and Natalie! We are honored to share both awards with these wonderful designers.
For more information about Angela Knight, visit her website at Angela Knight Designs